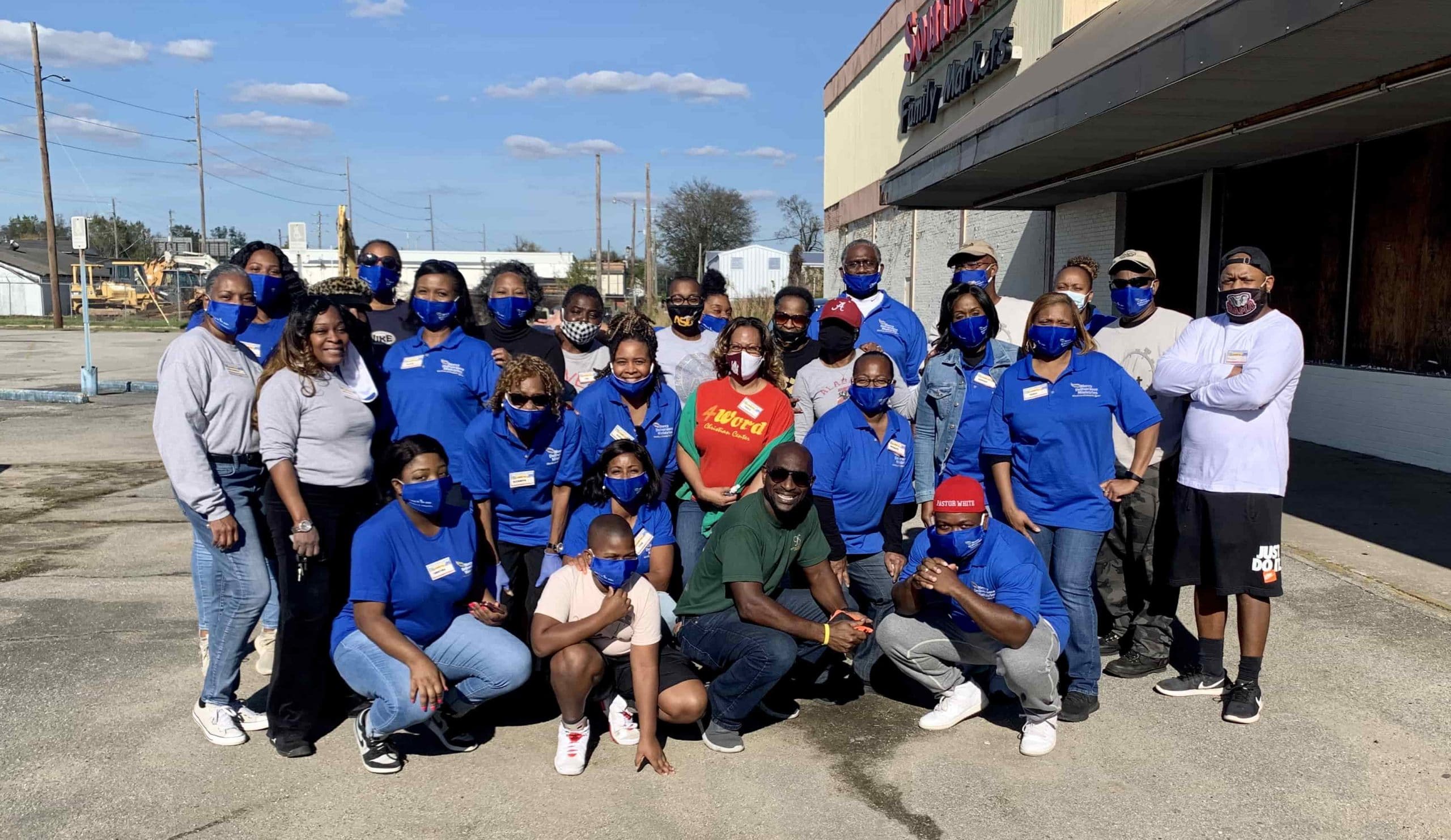 It all started with a phone call from Tahiera Brown, Executive Director of The Interlocking of Arms: The Gussie Grant Foundation, on September 22, 2020.  After viewing a recent Atlanta news story about Community Teen Coalition and its founder Dominic Stokes’ successful distributions in the Atlanta area and being aware that Jefferson County, Alabama had not received any food box distributions during the current third phase of the government’s Coronavirus Food Assistance Program, Tahiera reached out to Mr. Stokes.

She shared with him her desire to obtain food boxes for Jefferson County. Mr. Stokes, a complete stranger, agreed to help. After several unsuccessful attempts to secure a local partner in Jefferson County to assist them in their efforts, Tahiera called me.

Tahiera and I began a new collaborative effort with the open-hearted stranger from Atlanta. God had already laid the groundwork for Mercy Deliverance Ministries’ local partnerships (For-Word Christian Center and Christian Fellowship Church) for food distribution as we are preparing to launch “PopUp Markets” with the mobile grocery vehicle. The task then became how to secure food boxes and how to get them to Jefferson County, Alabama.

After hours of phone calls and research, we realized we were more than a day late and a dollar short. We learned that there were no distributors or trucking companies in Jefferson County awarded bids during this third phase of the program. This explained why the food boxes had suddenly “dried up” in our area. After reaching out to those companies, we realized it was going to take a miracle to get the job done. We had to get approved, then find a drop-off and pickup location partner in a county adjacent to Jefferson, and finally, we had to find a trucking company with available loads of food.

After tirelessly working and praying for direction for a month, I had given up hope and was walking away from the project until late afternoon on Thursday, October 15th, when I received a call from Mr. Stokes in Atlanta. He had just received a call asking him to accept five loads of food boxes. He was offering us a load that needed to be distributed within the next week or two. Of course, I asked for a two-week lead time to organize our first ever food distribution. I immediately went to work calling together the team that God had assembled: Pastor Tadera White of For-Word Christian Center, Pastor Andy Ragland of Christian Fellowship Church, and Tahiera Brown of The Interlocking of Arms.

The entire event was a complete faith walk. I was reminded time and time again that I was going to have to trust God like never before. I promise you; it wasn’t until those food boxes arrived from Atlanta in Ensley at For-Word Christian Center on those refrigerated trucks that I KNEW they would show up. During those two weeks of organizing and preparation, I CONSTANTLY reminded God how far out into the deep that I had gone trusting and believing Him and taking Him at His Word.

For everything that God does, there are so many other things that He does that we are unaware of. I know that God showed up to encourage His people that they are NOT forgotten. I know that He stretched and increased my faith and that of those working alongside me. From the truck drivers who drove to Atlanta at 4:00 am and were blessed to see people smiling and thankful to receive food, to the police officers who were there serving the community on their off days, to the children in the cars receiving candy who otherwise would not have had a social outlet due to COVID-19 restrictions, and to the selfless volunteers who decided to trust God with their health and serve others during this pandemic – God manifested His love and faithfulness to us ALL.

To view media coverage about this event, click below:

Will you join us?

Learn more about ways you can get involved with MDM